While environmental organizations often hold up Indigenous and other people of color as “stewards of the land,” the fact is very few of them can point to Black and Brown people within their own leadership ranks.

Even while just getting out to enjoy the outdoors, people of color may be viewed with suspicion by upper-middle-class white folks who aren’t used to seeing them there — as when a white dog-walker called the police on birder Christian Cooper in the now-infamous cell phone video.

“This year, as the U.S. experienced a national reckoning on race, more people than ever before were talking about racial injustice — yet BIPOC (Black, Indigenous and People of Color) organizations have continued to have their work overlooked and underfunded, particularly in the white-led, mainstream environmental field,” said a press release from Youth Outside, an organization working to advance racial justice and equity in the outdoor and environmental movement. “The Liberated Paths Grantmaking Program from Youth Outside is working to change that.”

The new program (launched last summer) “seeks to build a more just and equitable outdoors movement by shifting resources to and building power within Black, Indigenous, and communities of color,” a press release said. “The program celebrates the deep connections and contributions that communities of color have made to the planet for centuries — all of which have been ignored by the white-led, mainstream environmental movement.”

The initial cohort of 17 grant recipients, who each received between $14,000 and $22,000, includes two Navajo groups, Indigenous Cultural Concepts and Navajo Sustainable Housing Initiative.

Louise Benally, a health educator in Winslow, describes the nonprofit she founded as introducing young Navajos to “the art of being Diné.” Benally said she founded ICC 12 years ago after noticing outdoor activities were being replaced by cell phones in the lives of Diné children.

“Every time I saw a young person, they were glued to their cell phones,” she said. “To me that’s a problem. It’s making these young people not able to think for themselves.” Benally, 60, also observed that almost no one under 30 knows the basic survival skills she grew up with: tanning hides, making kneel-down bread, gathering edible and medicinal plants in the high desert, raising food. “It made me sad,” she said. “In my generation, we just grew up with that.”

Starting with her own grandchildren and their friends, Benally started leading groups into the outdoors to teach some of those vanishing skills. The kids forgot all about their cell phones. “They really enjoyed it,” she said. She added an art component to get the creative juices flowing. “When you’re creating something, you’re thinking for yourself,” she explained.

A few years ago, the program caught the attention of the Outdoors Empowered Network, which supplies camping equipment to BIPOC-led programs that get children of color into the outdoors. OEN Interim Executive Director Seraph White said public lands have often promoted a “culture of erasure” when it comes to the Native Americans who once inhabited them. “In the case of many of our national parks, they actually moved indigenous communities off the land so it could be enjoyed by mostly white recreationalists,” she noted. “I really wanted to partner with someone like Louise who is reclaiming her place in the landscape.”

Benally, who is To Aheedlíinii Nakaii Diné’e born for Tábaahá, said she appreciated the $16,000 grant from Youth Outside and would use it to build a kitchen at her Winslow property “to bring back whatever we gather out there and process it into food, salves or tinctures.” 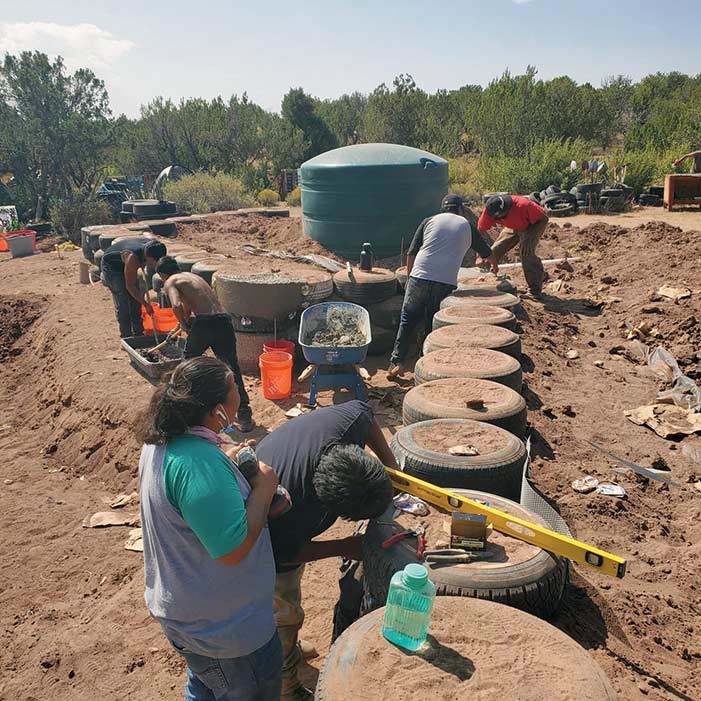 Courtesy photo
Last year’s Sustainable Housing Initiative participants work on an earthship in Lupton, Ariz. The initiative recently was awarded a grant that will enable the program to host more workshops this summer and fall, if COVID-19 permits.

This project seeks to take two problems on the reservation — trash and unemployment — and turn them into a solution for another problem: the lack of decent housing.

Earthships, pioneered by architect Michael Reynolds in the 1970s, are sustainable dwellings people can build themselves out of old tires, cans, bottles and local materials such as mud and clay — and may be the perfect fit for the Navajo Nation.

“If you tell people you’re building a house out of garbage, it sounds disgusting,” admitted Kern Collymore, who founded the Sustainable Housing Initiative after he and his partner ran into roadblocks trying to obtain an NHA house on the Navajo Nation. “But they’re really beautiful and comfortable.”

Best of all, the indoor temperature hovers between 62 and 78 degrees with no heating or cooling.

The project’s strategy, said Collymore, is to teach people how to build their own sustainable homes in hopes the tribal government will notice and put some resources behind them. “Right now the tribe is stuck in this rut of building $200,000 boxes that take a ton of electricity to heat and cool,” he noted. “Meanwhile we have all these unemployed people, which you can think of as a huge labor force. Instead of putting money into building unsustainable homes, why not pay people to build their own homes, once we give them the skills?”

Collymore said he and his friend Nate Etsitty, a permaculture expert who gives workshops on sustainable farming, plan to use the grant to share what they’ve learned about permaculture and sustainable housing.

The men said they will offer a series of three-week-long workshops where participants will live on-site and learn hands-on how to build an earthship, a straw-bale home or a “walipini,” a partially underground greenhouse for growing vegetables year-round. If the pandemic subsides, the first workshop will be in late May through early June.

Rather than charge for the workshops, “We want to offer people stipends to attend,” Etsitty said, adding that the rest of the money could go toward such “logistics” as food and portable toilets. While the men are grateful for the grant, they’re hoping once they get started, chapters or the tribal government will take over the funding and spread the workshops all over the Navajo Nation.

There won’t be any lack of building materials. “We found 500 tires within a 10-mile radius of our building site,” Collymore said.

“What is exciting about this Sustainable Housing Initiative is that we are using permaculture, indigenous wisdom and K’e’ to create a movement that will positively affect our peoples in an age where we have crowded multigenerational homes where people are stressed, depressed, and unhealthy,” said Etsitty.

“We have an opportunity to use what people consider waste as a resource,” he said, “and build sustainable homes.”